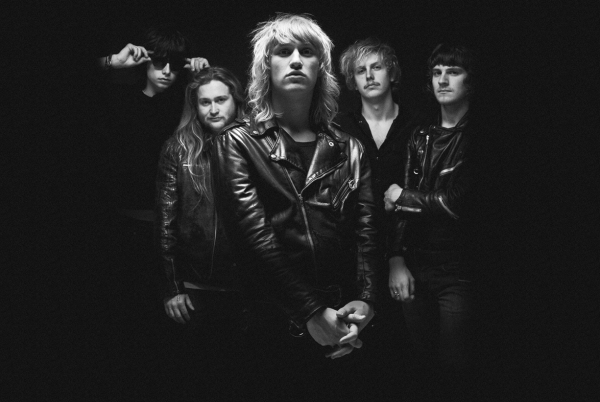 Let me introduce you to the most exciting thing at the moment: A product of DK. Denmark, that’s right folks, these mostly blond-haired motherfucking badasses are danish. So what does it tell you already, huh? We have got The Blue Van, Reptile Youth, and the new girls from Nelson Can – Coming from this lovely country.

But I guess it’s really time to introduce you to the best new Indierock’n’roll-Band of this year. We’ve been seeing them three times on different kind of shows (small promo show, a nice accoustic show on a Radiostationbus and finally an unbelievable crowded Clubshow. The club was called “INDRA” and it was the venue where The Beatles all started it up. Therefore, it should be a good future for Go Go Berlin if they caught up the spirit wich is flying around there in this area).

Well I have been listening their icons The Blue Van for over a half a decade (sounds really long isn’t it?) and since TBV experimenting into more direction of the 80’s casual Rock, somehow I have to be honest with myself and must say, I really must say it’s kind of like they are the little kids of Soren, Steffen, Per and Alan. I really love their RnR attitude. The whole thing is super spontanius and true. Nothing set up here and it gives me a feeling of being smacked back into the late 70’s. Late 70’s is actually what really fits here. Go Go Berlin matches on every single stage. Only thing I guess they need is a little more success. But as Soren once told me “Overnight success takes about ten years”. Somehow it’s true. Danish wisdom I suppose.

We chatted with the guy with the longest hair, Emil:

1. Go Go Berlin, what amazing hair you have…Is there a reason you’re having the longest ones?

“I’ve always had long hair, startet growing it way back in Techschool. It started out as a bet. With one of my friends, the one WHO cuts his hair first owed the other a case of beer, I won, and then I kept it ever since.”

2. The Blue Van is something you’ve heard about. How did they may inspire you?

“We met The Blue Van guys a couple of times before we were invited to be “Warm up” at thier DK Tour, they inspired us in looks and songwriting, and guitarshreeding, really a fun Tour with those guys! It Was our first “Real” Tour, so it was amazing to be a part of.”

“I’m not really sure about the guitarist’s gear, they have shitloads of pedals, but one thing I know is that they can spent many hours on finding the right distortion or fuzz sound, and that is what does the trick, getting nerdie with your gear until you are satisfied with the result. My gear is a DI, Korg pitchblack tuner and a sansamp DI distortion, my setup is that I have a clean DI and a distortion DI, the sansamp, and when I use the distortion. It’s mixed with the clean signal, so I do not lose all the button end, and it’s controlled with a Boss shifter pedal… If it dosn’t make any sence I’ll send a pic…”

(It did, but still: Here you go, dear reader of Hey Indie’s Band of the week…)

4. Being a Bassman is not always the lovliest position. You surely do not care about it and smash it to the ground all the time. So, stagepresence is a heavy point on your live show. How do you prepare yourself?

“I have got the tightest drummer, so I love my position! We have played many many concerts, and then you get a surtain routine before a concert, we have different ways to prepare, but I like sitting with a guitar chilling before a concert, and then we have all kinds of secret rituals we do before every gig.”

5. What’s next after your germany tour? Your album is out now? Conquering the world?

“We released the album on 30th of September… and then we kicked off the DK Tour last… The Tour will go on until the end of November, and then we come back to germany early next year when we release the album down there, but there is a little buzz in the surounding countries, so I think we will make a small visit to those places while we are down there.”