Love. Love supports and surrounds us all the time. This time, we wanna show some love to the most beautiful motion picture making, sound developping, and epic mastermind behind Cristallin. A young talented guy who started way back in the 00’s making videos for his friends. Filming skatevideos and just for fun on his journeys. Journeys full of life, love, and other things. Trips to your brains and back to your heart.

Cristallin likes to explore the world and tries to explain it in his own music wich you can describe as much as of Mount Kimbie, Jamie XX or other wavey artists and musicians like the big man Tycho. If you know some Up – and Downbeat stuff from that guy Tycho you will absolutely love Cristallin for the rest of your entire life. Life is excactly what Cristallin is about. Therefore it’s super funny he’s having an upcoming release and his first ever EP called “eon” on “The Brio Life Records“. Let’s see what Cristallin has to say all about his art and musical style… We’re extremely happy we’re one of the first guys who’s actually having an interview with him and squeezing him out so he can finally tell some truth about himself… Here we go:

1. Cristallin. What an expression. Where did you catch up this word ?

“Cristallin means lense in french. First it was just my pseudonym for video production but then as I started making music there was no need to change the name because my sound has a lot to do with visual aspects.”

2. Your upcoming, longawaited debut EP is called “Eon”. What’s eon for you?

““Eon” serves to set in stone its own inspirations by literally documenting them in the form of four short films. Rather than re-creating my emotions through forms of music videos after the EP is finished, the visuals were captured first, in which the four songs then acted as soundtracks during the second part of the project. By reversing the process of sonic and visual interaction, nostalgia can radiate in abundance. It’s an attempt for music to become permanently memorable, timeless, and last eons…” 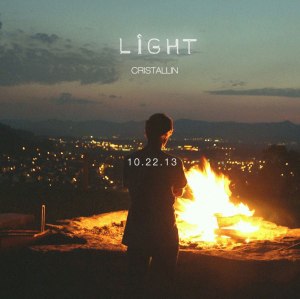 3. You’re the master of videocutting in this high colored fluffy videomaking era. How would you describe your style of cutting?

“I have this subjective, idealized picture of things I see in my mind which is kind of like what you described as fluffy and high coloured. I can see a little parallel to the romanticism in my work especially when you look at the Wanderer above the Sea of Fog from caspar david Friedrich as an example. So the moment when I film something with my camera the whole process to the final product is already done because I already had the idealized video in my mind the moment I captured it.”

4. The BrioLife Records signed you for your first official release. How did that come?

“First of all it’s not really a record label its more collective. I really liked their idea to think of music visually, translating each sonic element into visual auroras, montages, and nostalgia. They believe that with this method people can find the deeper sounds in music and appreciate it for its full intention and value. So they have much love for synaesthesia. This is something I share with them.”

5. When are you touring?

” I’m still working on a live concept. something I definitely do not want is going on stage alone. The process of recording is very important for me so I want these elements on stage and not just press a few buttons. So rehaersing will take us some time. There may be the possibility for a live debut in early 2014 in berlin. Lets see what the future holds.”

LISTEN TO CRISTALLIN ON SOUNDCLOUD

WATCH ALL VIDEOS HE HAS DONE, IT’S A MUSIC LOVER’S MUST

One response to “BAND OF THE WEEK: Cristallin”