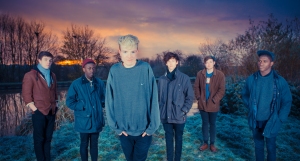 It’s Christmas. Well not quite yet, but we like to treat you guys so we thought we’d give you a present early, just be quiet and don’t tell santa.

2013 has been a big year for us as we’ve set up our blog and begun a weekly feature; ‘band of the week’. You may be aware that we haven’t published this feature in recent weeks but we’ve been working towards something special. How fitting then, to bring to you a band who we’ve followed right through 2013 and of course, there is a Christmas theme.

HAUS are an indie pop group who are reminding us that being in a band can be ‘jokes’ and ‘lolz’. They’re six cheeky chappies, evident through lead singer, Jack’s, brash vocals, but that’s not all; they can actually play too. Occasionally using three guitarists in Samuel, Daniel and Ashley, these boys aren’t just sitting about, they’re fiddling with over-laying bouncy riffs. Think of Two Door Cinema Club without the occasional mood swings or early Foals with their picky, slightly all over the place approach. Come to think of it, HAUS are just what the indie-pop scene needs.

Debut track, ‘February’, is cool and chilled – no pun intended. It’s gentle approach and funky riffs, occasional cowbell and effective pauses give it a unique quality which you can kick back to. Other tracks include, ‘Token’, which is your typical jumpy, upbeat tune which we’ve almost come to expect from indie-pop bands. ‘Yankee’ is bubbling and brooding, coming to a climax with Jack’s brutally honest lyrics.

They’ve got the skills, they’ve got the balls and they’ve certainly got the spirit, and not just of Christmas, but have they got what it takes to make 2014 a cracker of a year? We think so.

I managed to grab lead singer, Jack, for probably my favourite interview of the year – good timing then.

How did you guys meet?

Sam, Ellis, Daniel and Lyle met at music college. After a few months as an instrumental band, Jack became the singer on recommendation from Ashley, who Jack had introduced to Sam a few months earlier. After a dirty house party gig in which Ashley stepped in on synth for lolz, todays band was formed.

Your EP ‘Bless’ is a neat piece of work. How was it creating the EP?

The EP was all completed pretty quickly but a lot of work went into it, it’s always immensely affirming creatively to be in the studio, performing but also concentrating on the structures and layers of the stuff we’ve come up with, and it was a laugh really, if you put us six anywhere for a certain amount of time we’re always going to make our own fun. Jack and Sam found some kitchen knives which kept them entertained for a few hours, and there was a chicken shop round the corner so we were sorted.

Seeing as it’s Christmas time, if you had to cover a Christmas song which song would it be and why?

If we had to cover a Christmas song it would have to be ‘All I Want for Christmas is You’, it’s got a gorgeous heartbreak vibe to it. Actually nah that’s a lie, it would either be ‘Simply Having a Wonderful Christmas Time‘ or ‘I Wish it Could be Christmas Everyday’, they’re both classics and we’d give it a cheeky funk. Like a dancehall version. That’d be jokes.

Which musicians have you been listening to in 2013?

Aspirations for 2014 or any new years resolutions?

In 2014 we’re looking forward to doing some pretty big support slots, and doing a few festivals over the summer, we’re also knocking out a couple of singles in Spring so watch this space!

Treat yourself to HAUS’ tunes FOR FREE, HERE!

One response to “BAND OF THE WEEK: HAUS”